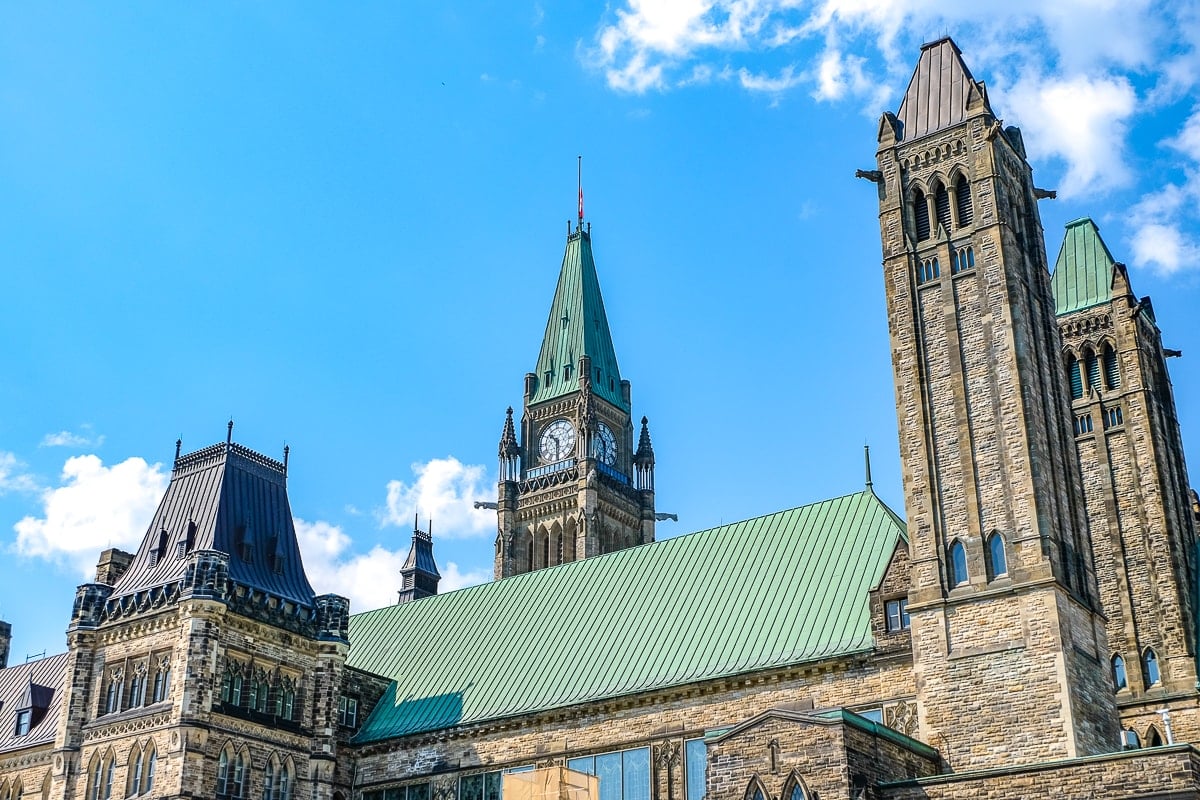 Any questions? Ask them in our Ontario Travel Facebook Group!

Links in this article may earn us a little money if you book/ order stuff. More here.

Here’s How To Get From Toronto To Ottawa!

So you are in Toronto and thinking to yourself how neat exploring Canada’s capital would be, right? Well, if you are done visiting Toronto and want to get from Toronto to Ottawa, you certainly have options!

The route from Toronto to Ottawa is pretty well laid out – meaning you can get there in a bunch of ways: driving yourself, Greyhound bus, rideshare, train, or even taking a flight with Porter!

Before he met Lisa, Eric had driven to Ottawa countless times. Even with Lisa, we made the trip once or twice. Eric used to live in Kingston which is basically halfway to Ottawa from Toronto along the highway. So, needless to say, he knows how to get to Ottawa. Let’s get you there, too!

Once you get there, check out these other posts for Ottawa trip planning!

Toronto to Ottawa: All Options

If you want to get to Ottawa from Toronto, you have a few options to choose from. Each one differs by time spent travelling, total distance, and cost – and each has its own pros and cons.

We will outline the travel options in order below: driving by car, taking the bus, hopping on the train, or catching a flight!

Toronto to Ottawa By Car

The most common way to get between Toronto and Ottawa is likely by car. The (driving) distance from Toronto to Ottawa is between 400 – 450 km and takes between 4 and 4.5 hours – depending on the route you take.

Toronto to Ottawa Self Drive

You can either go Highway 401 out of Toronto all the way to Highway 416 (heads north) into Ottawa, then catch the 417 (which is basically in Ottawa) OR take Highway 7 from around Peterborough all the way into Ottawa, again, catching the 417 once you get there.

Option 1 with the 401 is faster and easier, whereas Highway 7 (part of the Trans Canada Highway) is more scenic and a tad slower with small towns on the way.

Overall, the trip to Ottawa from Toronto is scenic with green trees, open fields, and rock formations along the highway as you go. You can even stop in small towns or at famous roadside attractions like The Big Apple in Colborne!

Once you are approaching Ottawa, follow the signs for downtown/city centre. You’ll end up on the 417 that runs through the city centre’s south end. Then just get off where you need, like Bronson Ave or Bank Street. Renting a car is a great way to get this drive done without much hassle. The drive is quite nice, too!

If you wanted to Rideshare between the cities, there are plenty of cars heading in that direction. You could check out Poparide and/or Kijiji to arrange pick-up and price (usually $30-40 CAD).

In case you were wondering, a cab from Pearson to Ottawa would be over $700.00 CAD so you’d be better off booking a flight from downtown Toronto – unless you have a large group then maybe it makes sense? Here’s a website for prices!

Toronto to Ottawa by Bus

If you want to take the bus, there are 8 daily departures. Web fares (bookable online only) are as low as $47.50 CAD but up to $80.00 if you need a refundable/flexible ticket. The bus takes anywhere from 5 to 7 hours, depending on the route taken (they vary slightly) and the number of stops.

We have never done this route but it’s Greyhound and leaves from the Toronto Coach Terminal so you can expect it to be safe and fine – just long. You can check out the Greyhound website to start trip planning.

The main bus terminal in downtown Toronto (also where Megabus leaves from) is hard to find even if you are looking for it! It is close to the corner of Bay and Dundas Street West. Just walk north towards Edward Street and the terminal entrance will be apparent on the left.

Once you are in Ottawa, you will arrive into the Ottawa Central (Bus) station. There isn’t too much there besides vending machines and a Mr. Sub (sandwich shop). You can read about the station here and here is the address:

Once you get off, unlike the Kingston Bus Terminal, you are pretty well downtown in Ottawa so you can take the bus, grab a cab, or walk to your final destination (distance depending).

Toronto to Ottawa by Train

If driving and buses aren’t for you, then you are in luck – because Ontario’s larger centres (and even some smaller cities) DO have train service. For these long-distance trains, you can take the ViaRail. Eric has taken the ViaRail to Kingston and Montreal loads of times and the ride is always really good, honestly.

For the Toronto to Ottawa train route, there are as many as 10 departures from Toronto Union Station to Ottawa daily. Some days have less frequency. The train takes about – on average – 4 hours and 20 minutes. If you book online the “Escape Fare” is as cheap as $40.00 CAD (one way) but you have to book online and book early usually!

To leave from Toronto, head down to Union Station which is on Front Street. This is Canada’s busiest transportation hub (even busier than Pearson) so you certainly can’t miss it! To take the ViaRail train, follow signs for the Grand Hall / Via Concourse, and then down the you’ll see signs for Departures. You can always ask a staff member if you are lost – they are super friendly!

The Ottawa Train Station is nothing fancy – although it’s celebrating its 50th birthday! It’s very much a terminal for picking up people and getting on/off trains. There’s not much for food options, but there is a large parking lot with paid parking, and also a pickup/drop off. Here’s more information about the Ottawa ViaRail train station.

The train station isn’t right downtown so you will need to either take the bus (OC Transpo) or grab a taxi to get to your next location/downtown. You can hop on bus route #61 in the direction of Terry Fox and it’ll take you just over 20 minutes to get right downtown Ottawa.

Toronto to Ottawa by Plane

The final option would be to fly from Toronto to Ottawa. Unlike flying to Kingston (which has a tiny airport), flying to Ottawa isn’t as crazy an idea given that it has a real airport (again, sorry Kingston). This option also sense if you are flying from elsewhere into Toronto and then connecting through to Ottawa.

For the flying option, there are two airports you could potentially fly from in Toronto: Toronto Pearson International (outside the city centre) or Billy Bishop Toronto City Airport (located on the Toronto Islands downtown). We will explain the difference in-depth below.

Ottawa, being the nation’s capital, has a small but busy international airport called… Ottawa International Airport. The airport code is YOW. The airport is located in Nepean which is well south of the city centre. You’d grab a cab to get into the city, most likely.

The airport is not as large as Toronto Pearson but still has a few US flights and serves mainly Canadian/Ontario destinations – like Toronto. Speaking of Pearson, here’s how you’d fly to Ottawa from there.

There are approximately 20 daily routes making the flight from Pearson to Ottawa, in case you wanted to know. Air Canada does 12 of them, West Jet does 8. Flight time is 1 hour. You can learn more about the airport in Ottawa by visiting the Ottawa International Airport website.

There are approximately 16 daily routes making the short flight (flight time of approximately 1 hour) from Billy Bishop Toronto City Airport. This is the airport on Toronto Island and NOT Pearson.

Flying is expensive but faster and Porter is a great small airline to go with. You can learn more about flying Porter to Ottawa here.

And there you have it – basically all of the ways possible to get from Toronto to Ottawa. We’re sure that you will choose a way that works best for you – you certainly have options. Be sure to relax and enjoy Ottawa when you get there!

Pin it for later!

Hi, we’re Eric and Lisa – welcome to Ontario Away! As an Ontario-born Canadian, Eric has seen lots of his home province while Lisa, his German, is just getting started. Together we plan on exploring every corner of this beautiful province – and will share our adventures with you.

As an Amazon Associate we earn from qualifying purchases.

We also have another travel blog called Penguin & Pia where we share more travel tips about destinations in Europe, North America and beyond.

If you prefer to watch videos instead, then stop by our YouTube Channel!