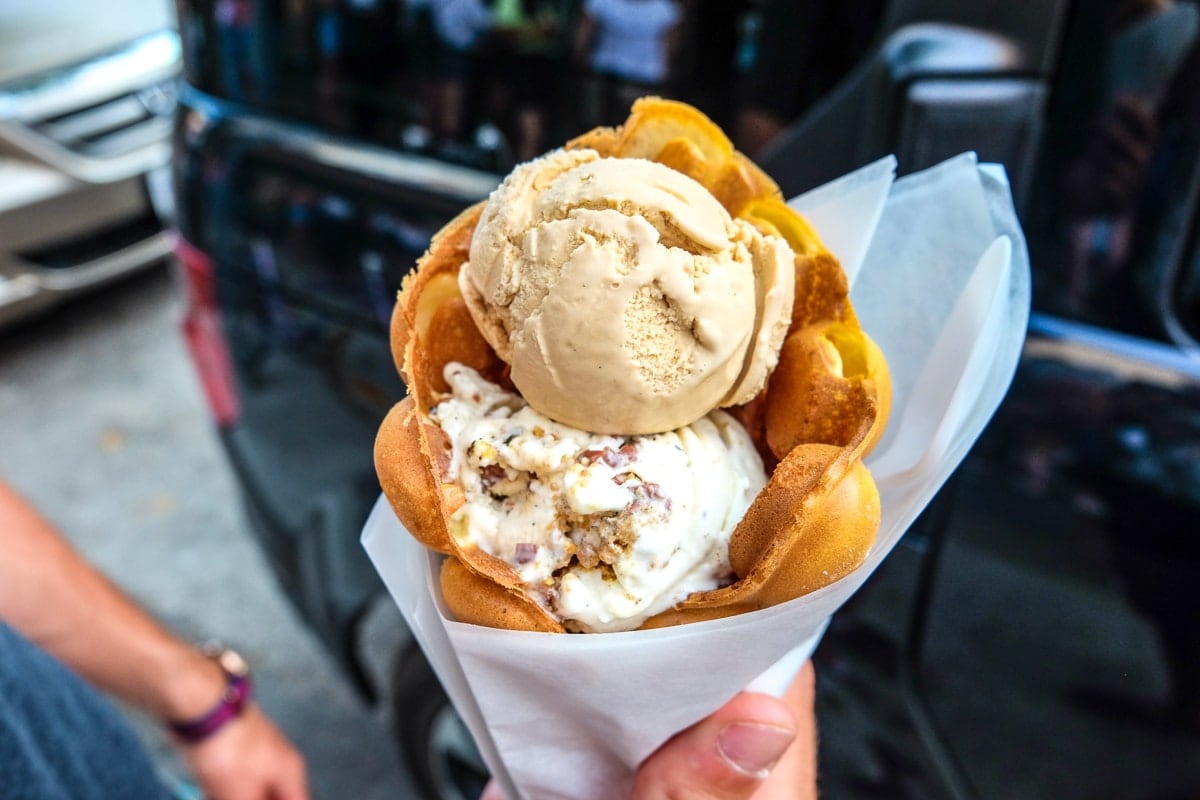 Any questions? Ask them in our Ontario Travel Facebook Group!

Links in this article may earn us a little money if you book/ order stuff. More here.

Want The Best Ice Cream In Toronto? Lick No Further!

Looking for the best ice cream in Toronto in 2019? We got you covered! There are few better ways to cool off and enjoy a treat than grabbing a Toronto ice cream. Given that the city is massive, Toronto is loaded with many places that all offer their own take on the sweet treat.

Over the years, we’ve gone for ice cream downtown or in the East end (Leslieville) after dinner with family, friends, or just us two. Each time, it was a great experience. But who/where really has the best ice cream? “Best” is a relative term – but some ice cream places in Toronto are certainly more known than others!

So, to help you decide where to head for a frozen treat, we walked around Toronto to eat ice cream. We’re not kidding – we did this over a few days. For the record: it sounds like a great idea BUT you can only eat so much ice cream in one day! Here’s where we went for Toronto ice cream and a few other notable mentions along the way!

If you plan on spending one day in Toronto – or maybe longer – here are some helpful Toronto posts you might find useful!

*A Friendly Heads-Up: This post is made up of ice cream places mostly downtown. That said, it’s a post that is certainly not finished yet – there are plenty of ice cream shops to hit up in areas like Midtown, Mississauga, Scarborough, North York, etc. We will add to this post as we explore and enjoy them!

Starting off with arguably the most popular ice cream place in Toronto. Yes – we went to Bang Bang. If you don’t know the hype (we didn’t at first), Bang Bang specializes in small-batch ice cream and unique “holders” (like waffle cones or baked cookies). You can even take some home in a “take-home” container.

Located over on Ossington in the city’s west end, it would be easy to miss since it’s just a small shop on the east side of the street heading north. Of course, the line up outside makes Bang Bang a dead giveaway. We are never ones to wait in a line because something is hyped up but our 35-minute wait was actually worth it.

Honestly, the ice cream was excellent. As for flavours, we shared one scoop of campfire marshmallow and one scoop of London fog (like the tea). If you don’t eat dairy, you’ll be happy to hear that they also have vegan ice cream on tap!

You can get your ice cream in a cup, in a cone, between cookies (like an ice cream sandwich) – or in an actual waffle (we got this) which they bake fresh right there in front of you. Literally hot off the press.

Overall, we’d say try out Bang Bang for the smooth ice cream and the nice staff who know their stuff (you can even sample – but only a few, please). You can learn more about Bang Bang on their website.

If you’re looking for a good ice cream to try, then Ed’s has to be on your list. Ed is an actual guy who started it all at the Beaches location back in 2000. Since then, Toronto has been blessed with four Ed’s locations serving up small-batch, homemade ice cream that is done onsite and with the purest of ingredients.

We’ve been to Ed’s a handful of times – always at the location in Leslieville – usually after dinner at a place nearby. Every time, there’s a small line up – but it’s worth it. They also do other sweet treats like gelato, frozen yoghurt, milkshakes, sundaes, and some locations even offer coffee and biscotti!

The next time we go we will snap a photo of the cone we get! You can learn all about Ed’s here.

We realize we say “if you want great ice cream” over and over but we did NOT see Arctic Bites coming and WOW was it good! Located on Baldwin (just off of McCaul and south of University of Toronto), you can easily walk past Arctic Bites nestled among the other restaurants and shop fronts.

Inside the small, clean shop, you’ll find a place where they do “Thai Rolled Ice Cream”. What’s that mean? If you’ve ever been to a place like Cold Stone Creamery – or an ice cream shop with a frozen cold plate behind the counter – you’ll know. Basically, they pour the ice cream mixture into the frozen slab and freeze it right in front of you!

Then they artfully spread the ice cream and scrape if off the cold slab. When they do this, it comes off in ROLLS which they insert into the cup. Super cool! We had the Mr. Grey which was essentially an earl grey tea flavour with whipped cream, Frosted Flakes, a waffle cookie, and a condensed milk drizzle (seen below).

Overall, we’re so glad we stopped by Arctic Bites and would definitely recommend stopping through if you’re looking for a nice cold treat! To learn more about rolled ice cream, check out the official Arctic Bites website.

Yup, we went to the place with the Instagrammable fish cones. Heard of Sukoi before? We hadn’t until a friend mentioned that we should check it out – it was among her favourites in the Queen West area. Well, we’re glad we did! Sukoi is close to Trinity Bellwoods (a park, for the non-Torontonians) so it makes a great stop heading to or coming from the park on a hot day!

Sukoi is small with limited seating – but once inside you get to experience Taiyaki! Taiyaki is basically a Japanese cake shaped like a fish. Ours was filled with a sweet red bean paste. Top these off with some soft-serve ice cream and you got yourself Sukoi!

In the photo above, we got the Vanilla Bean ice cream (there are lots of flavours) then chose the classic red bean filling (but you can get Nutella or custard. Finally, we topped it off with sprinkles – they added the Teddy Graham Crackers!

It was honestly really, really good. The red bean paste was rich and actually went well with the melted ice cream and the light fishy cone! Lisa really liked the taste of the fish cone as well. We’d recommend Sukoi if you’re walking by. The shop also had drinks and other things – not just ice cream. You can check out Sukoi here.

Located right at the corner of Queen West and Kingston Road, Brett’s has become a staple of east-end dwellers since 2017. Now, we honestly haven’t been but Eric’s sister goes semi-frequently and loves Brett’s. They have 16 flavours on at any given time but boast over 30 in total – and they do handcrafted ice cream that also comes in vegan, dairy, or gluten-free versions!

It’s funny – we’ve passed by dozens upon dozens of times and never made to try it out! In any case, Brett’s is a top place in Toronto so we will check it out the next time we are there – and haven’t eaten 3 ice creams in a single day! You can learn more about Brett’s Ice Cream here.

As told by Laura O. from She Who Wanders

When the temperatures rise, nothing really beats the heat better than ice cream. And leave it to the insanely Instagrammable Sweet Jesus to satisfy your sweet tooth!

With multiple locations around Toronto (and a few others Canada wide) you’re never far from sinking your teeth into some amazing frozen creations – crazy cones, marvellous milkshakes, perfect pints (to take home) and even creative cakes for that special occasion. They handcraft everything and it really shows in everything they sell.

So do yourself a favour and take your overheating self to cool down with a sweet treat from Sweet Jesus! In the photo above it’s the Red Rapture in a kids size. That means: Vanilla soft serve ice cream, red velvet cake, cream cheese icing, raspberry sauce, meringue crumble.

You can check out Sweet Jesus’ numerous locations on their website.

Last on this list, but certainly not least – we have Cosmic Treats! If you’re exploring Kensington Market and want a sweet treat, you should check it out. This shop is actually a completely vegan eatery and dessert bar. Made to be like a retro eatery, Cosmic Treats stands out among the Kengsington shop fronts.

We stopped in to try the ice cream which is raved about. Their vegan recipe ice cream is made from cashew and/or almond (which makes it really, really rich). They had a bunch of flavours behind the bar (which rotate constantly so they aren’t even listed on the menu) and Eric went for the chocolate.

Lisa had a brownie because she wanted to try another dessert – but of course, we shared. Both were really good! The day was super hot so we got to enjoy our treats along with water and a little bit of air conditioning!

It’s also good to know that as a bakery they also do cakes, pies, cookies, and more if you want to order a vegan dessert for an event! Overall, we’d say try it out to see the difference between dairy-based ice cream and nut-based! You can learn all about Cosmic Treats here.

And there you have it – a handful of the places to find the best ice cream in Toronto. Obviously, we missed a bunch but as we said we will add to this list as we go! Where do you love to get ice cream? Get in touch and let us know – we’re on a mission and we’ll check out your recommendations because why NOT eat ice cream, right?

Pin it for later!

Hi, we’re Eric and Lisa – welcome to Ontario Away! As an Ontario-born Canadian, Eric has seen lots of his home province while Lisa, his German, is just getting started. Together we plan on exploring every corner of this beautiful province – and will share our adventures with you.

As an Amazon Associate we earn from qualifying purchases.

We also have another travel blog called Penguin & Pia where we share more travel tips about destinations in Europe, North America and beyond.

If you prefer to watch videos instead, then stop by our YouTube Channel!